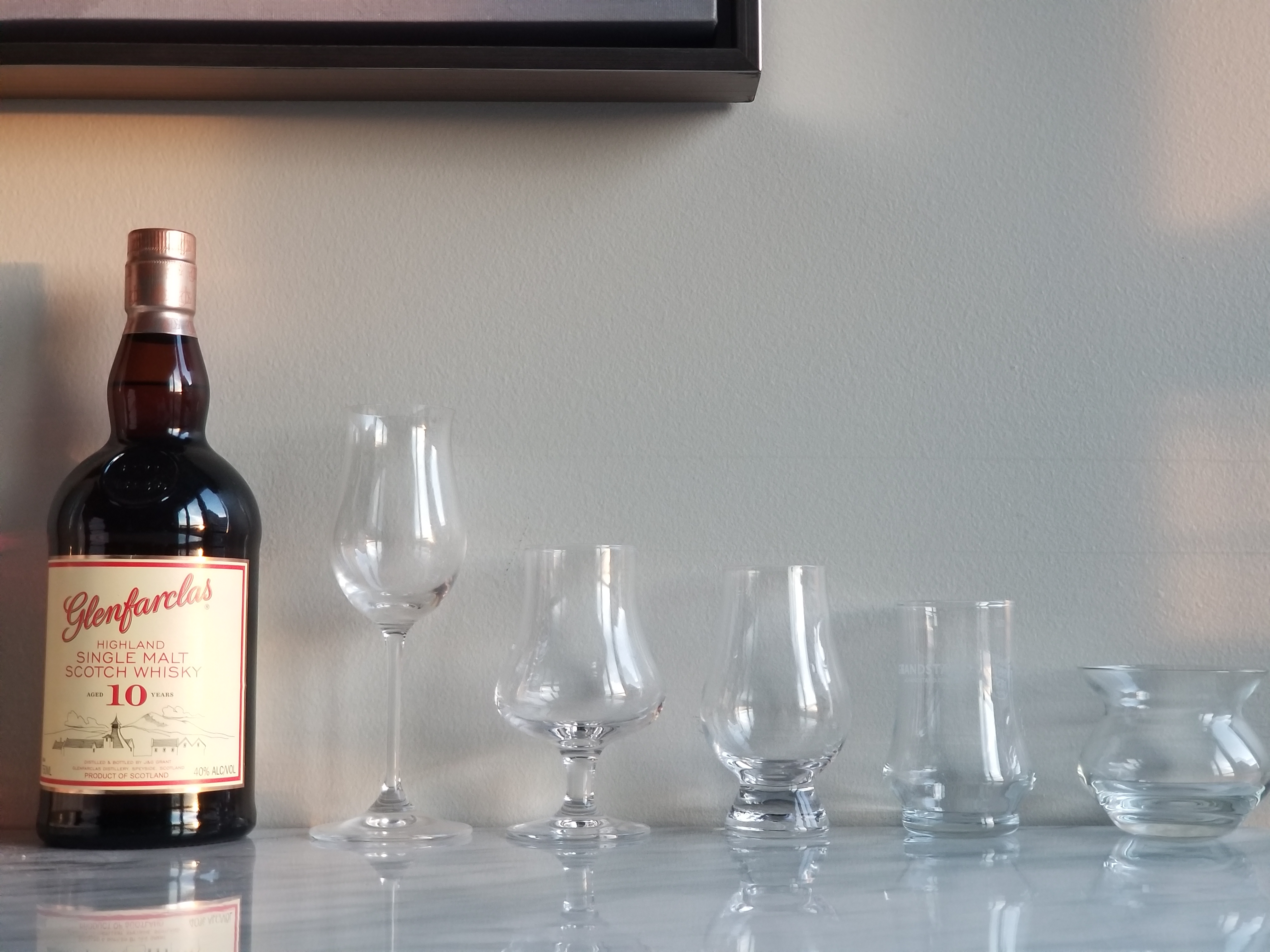 Over the last few years, I’ve amassed a few pieces of glassware that I’ve used in my reviews. I’ve used them all without a whole lot of rhyme or reason, mostly because they were clean and in the kitchen cabinet for use. Several of their manufacturers’ claim to have a created a “superior” glass for spirits tasting purposes. So I’ve decided to hold a “world cup” of the glassware I have to see where each one does well and see if there is truly a king of glassware. Is there a glass that simply performs betters? Or is it all a marketing gimmick? Let’s find out.

Our first contestant is the Riedel VINUM Cognac Glass, purchased for $17.08 per glass. This is the tallest of our competitors at 7.5 inches in height but also the lightest. The Cognac Glass weighs in at a feather-light 114 grams and has a capacity of 6 fl oz. To be perfectly honest, I bought this because I couldn’t find the Stolze Port Wine glass on Amazon in anything other than a set of six. This glass saw a lot of use when I first picked it up but has recently been found hidden in the back of the cabinet behind some other wine glasses.

Our second contestant is the Stolze Whiskey Nosing Glass, purchased for $8.13 per glass. This glass is 5 inches in height, has the largest capacity at 6.5 fl oz, and weighs in at 142 grams. This glass sees probably the heaviest single-piece use of those I have.

The third contestant is a crowd favorite, the one, the only Glencairn! I’ve bought a number of these over the years and given away almost as many. The Glencairn requires no introduction. It stands at 4.5 inches in height, has a 6 fl oz capacity, and weighs in at 139 grams.

Fourth is an Arc Kenzie Whiskey Tasterwhich was given out as a gift during the Omaha Whiskey Festival earlier this year. This tasting glass measures at 4 inches in height, has the smallest capacity of 5.75 fl oz, and weighs in at 149 grams. This taster is the only one of the group not explicitly made using crystal glass.

Last, but not least, is the newest member to the group–the Experience Neat Whiskey Glass. This odd-shaped glass was purchased at $16.95 per glass. Measuring at a squat 3.75 inches, this is the shortest glass of the group. It is also the heaviest, weighing in at a hefty 195 grams. No official capacity numbers exist for this glass, though anecdotally it will hold up to around 5 fl oz.

Disclaimer: This is not a paid advertisement, simply a product of boredom.

Each glass was filled with 1.5 fl oz of Glenfarclas 10 year, or as close to 1.5 fl oz as my clumsy hands can manage. The Glenfarclas 10 year was used because of it’s lower ABV (40%) in case I felt like drinking all 5 glasses, because it was a new bottle to be able to eliminate any potential effects from bottle oxidization, because I like it and was about to open it anyway.

Two tests were performed, a nosing test and a drinking test. My gracious wife volunteered (cough cough) to join me for the nosing portion. Additional marks were given based upon the physical characteristics of the glass including ease of handling and apparent durability during the drinking test. Both nosing and drinking occurred in the same order as the list above.

The Nosing Test (according to the wife)

Contestant #1 – Riedel VINUM Cognac Glass: The whisky in this glass has the most intense smell. The sherry comes through in an almost pungent way. There’s a bit of molasses as well. This is offset with slightly more unpleasant notes of plastic and cold medicine.

Contestant #2 – Stolze Whiskey Nosing Glass: The intensity of scent is notably lesser than the Ridel. Notes are similar, but appear to be far more diluted.

Contestant #3 – Glencairn: Intensity of scent is slightly less than the Stolze. This glass appears to accentuate the sweeter notes in the whisky.

Contestant #4 – Arc Kenzie Whiskey Taster: Intensity of scent is similar to the Glencairn. The sweeter notes are accentuated even more with the Arc Kenzie than the Glencairn however.

Contestant #5 – Experience Neat Whiskey Glass: By fair, the scent in from this glass was the weakest even when following the pictorial instruction guide found on the internet. Instead of smelling like a whisky, this ends up smelling like a champagne instead. Very light with hints of fragrances rather than strong notes. N.B. This was personally the wife’s favorite…but she that’s mostly because she likes champagne.

Results: It doesn’t look like there is a clear winner in this category, four of the candidates appeared to trade off various points from each other, but there is a clear loser. The Experience Neat Whiskey Glass loses out to all other competitors and somehow makes whisky not smell like whisky. Perhaps this would have performed better with a higher proof whisky, but it does not appear to deliver a better nosing experience as claimed by the maker.

Contestant #1 – Riedel VINUM Cognac Glass: This glass is fairly easy to hold; you can hold it by the stem like a wine glass or cup it in your hand. The biggest thing to note though is given how light this glass is, it does feel incredibly delicate and a lot of attention goes to making sure it remains intact. The opening is on the smaller side which probably helps with intensifying the aromas but results in the nose getting the way a bit as you go to drink. There are few issues getting the last few drops out of this glass.

Contestant #2 – Stolze Whiskey Nosing Glass: Much like the Riedel, this glass is fairly easy to hold in various positions though it is perhaps most natural to cup it in your hand. It’s fairly hefty and feels very sturdy. I don’t have to worry at all about accidentally snapping this glass by the stem if I’ve had a little bit too much to drink. The opening is definitely on the larger side resulting in no awkward collisions with the nose when taking a sip. It is a little harder to get the last few drops out of this glass though, as you do have to tip it back a little bit to get it past the bend.

Contestant #3 – Glencairn: The Glencarin is a little more awkward to hold. There is no stem to speak of resulting in having to cup it in your hand or grabbing it by the sides. All of these options result in the whisky inevitably getting warmed up a tad. The opening is slightly larger than the Riedel but smaller than the Stolze and can result in awkward nose collisions. There are few issues getting the last few drops out of this glass. It is also virtually indestructible, I’ve dropped one from the second highest shelf in my kitchen to find it happily bounce it’s way around to safety.

Contestant #4 – Arc Kenzie Whiskey Taster: This Arc Kenzie glass is on the more awkward side to hold. There’s no place to cup it in your hand resulting in holding it by it’s sides the entire time. It does have a wider opening than the Glencairn making it easier to drink out of. The glass appears to be well made and sturdy, I certainly don’t have to baby it.

Contestant #5 – Experience Neat Whiskey Glass: Though the most awkward looking, this glass is a lot easier to hold onto than it looks given the natural finger hold in the neck. This does result in a drinking experience that’s a little more similar to drinking tea than whisky and holding the glass for very long isn’t particularly comfortable. The opening on this is the largest and the only glass where my nose doesn’t touch it when drinking regularly. It is very hefty, I don’t see any need to baby it. Finishing your drink in this glass is very awkward, you have to essentially tip your head back 90 degrees to polish this off.

Thankfully, the whisky tastes the same out of all five of these glasses. Sherry, bits of honey, a hint of vanilla, and a side of malt. I’d be a bit worried if they tasted differently.

Results: In this category, it appears that each of the glasses have their own strengths that they excel in. Out of them, the Stolze probably performs the best overall. It’s sturdy, easy to hold, and has a larger opening result in an easier drinking process. The slight difficulty getting the last few drops out of the glass isn’t a deal breaker, especially compared to the Neat Whiskey Glass. The Glencairn performs very well as well. It’s only real drawback is the handling portion but that is a personal preference.

Conclusions: In the nosing category, four of the glasses traded off various aspects from one another. In the drinking category, the Stolze shone slightly more than the others with the Glencairn right on its heels. Based upon these fine margins, the Stolze arises as the overall winner (just like in football, the Austrians always win) with the Glencairn winning silver. Third place is a little harder to decide so I’ll give out two bronze medals to each of the Riedel and Arc Kenzie. The Neat comes in last having shown a poor performance in the nosing section. For whatever it is worth, I did find myself reaching for the Neat glass after the testing was done. The tea-like experience of drinking was calming meaning I’ll probably end up using this for some of my non-review drinking.

Thank you all for reading! For a full review of the Glenfarclas 10 year, you can find it here.