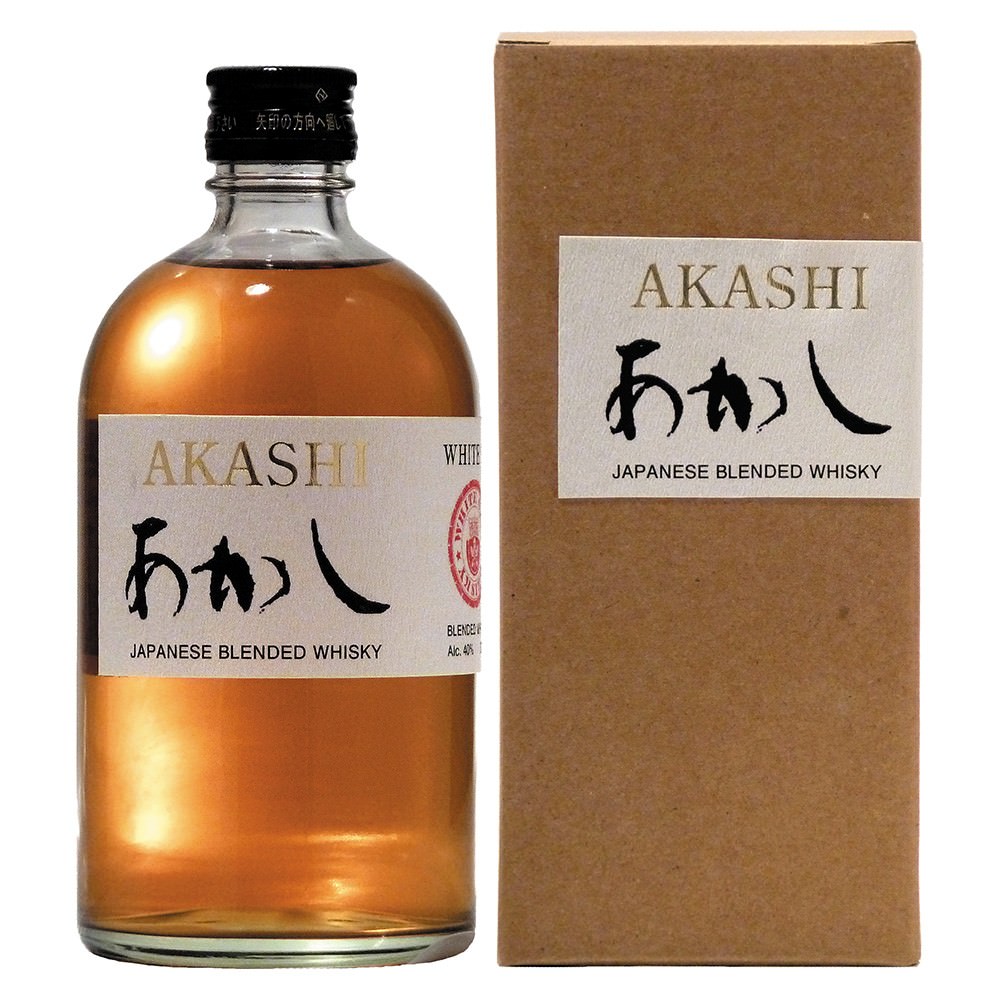 The market I live in is not one where world whiskies are readily abundant, so I was really surprised when a co-worker of mine found this Japanese Whisky Tasting Session/Class. I was even more surprised to see that the whiskies on showcase were not from the larger Japanese distilleries such as Suntory or Nikka. The tasting/class was put on by a wine store attached to a French restaurant (hence the wine glasses) which apparently was branching out to sell whisky (specifically Japanese whisky). A bit strange but I’m not going to complain about another place to go whisky hunting around here.

The whisky pictured in the post is the Akashi Blended Whisky.

Color: 1.0 Deep Copper, I would guess this has coloring added given that the Iwai Tradition had the exact same color.

Nose: Smells just like rubbing alcohol. Not pleasant at all, almost stopped me from drinking it.

Palate: Slightly sweet with some ginger notes. It reminds me a lot of crystallized ginger slices. It’s a bit hot and definitely shows signs of a young whisky but otherwise it is surprisingly pleasant.

Finish: Very short with a lot of those same ginger-y notes from the palate.

Conclusion: The crystallized ginger in the palate and the finish is really pleasant. It makes the whisky pretty refreshing overall. If the nose wasn’t so bad that I nearly poured the drink out (and one of the guys I went with did), I really think this could be a decent one to keep around.

Color: 1.0 Deep Copper, I would guess this has coloring added given that this has the exact same color as the Iwai Whisky.

Nose: The alcoholic “burn” is tempered making it so that rubbing alcohol isn’t my first thought. There is some smokiness which is pleasant.

Palate: Extremely hot and strong, punches far harder than a 40% whisky should. There are some notes of sherry and fruit which are pleasant. You get some of peat and smoke along with a pretty rich mouthfeel.

Finish: Very long with a slight bitterness at the end.

Conclusion: I was really worried this one would have a ridiculously harsh nose like the Iwai Whisky did. Thankfully, this one was not too bad. The sherry and the peat/smoke in the palate was really nice. If you gave it to me without showing me the label, I might have guessed it was a sherried Islay instead of a Japanese whisky. The finish is a bit of a letdown, while it’s long there isn’t a whole lot in it.

Nose: Light and sweet. You get a few notes of sherry and of shochu in the background.

Palate: Very smooth with a slight sweetness. It tastes like a well distilled sake/shochu rather than a whisky. It has the distinctive taste you find from those spirits instead of any notes you expect from malt or grain whisky.

Finish: Short and dry (just like a dry sake) with a little bit of black pepper.

Conclusion: This one was different! I did not think I was drinking a whisky at any point beyond the sherry in the nose. It tastes like a sake/shochu and went down just like a good dry sake.

Finish: Short but extremely clean (as in, your mouth feels clean after it goes down).

Conclusion: This one was very sweet but full of the Chinese plum flavor all the way around. It really reminds me of Grand Marnier only with plums instead of orange. It is delicious, but this is one best saved for the end of the night. Perhaps it will be to Japanese whisky what Grand Marnier is to cognac.

Notes: At a whopping 35% ABV, it is the highest ABV soju/shochu I’ve ever had. However, I would say this was perhaps the most un-enjoyable drink I’ve ever had. It was like I was drinking straight rubbing alcohol. No flavor, no sweetness. Just pure alcohol. Blech.

Final Thoughts: Overall, it was a really interesting experience to be able to taste whisky from the smaller Japanese distilleries. Each one had its own merits and demerits but that what makes tasting fun. The two Iwai expressions could have fooled me as being blended Scotch whiskies (especially the Iwai Tradition) while the two Akashi expressions were distinctly Japanese. If I were to buy any of these, I would probably go for either of the latter ones as they are so unique that they’d fill a nice niche in the ol’ whisky collection.