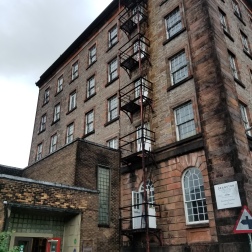 Our last stop on our travels around Scotland was at Deanston. From the get go, it’s a bit of a surprise to see as you’re pulling up to what looks like a large factory or a office building in the middle of nowhere. Apparently, the building used to be a cotton mill before it was converted into a distillery.

We did the tour that ended with two drams, I can’t remember exactly how much it was but I think it was about £12 each. The thoughts I had on those are jotted down at the bottom.

As a whole, this place was quite impressive simply due to the sheer scale of the operation. Having been at Glengoyne earlier in the day, seeming something on the larger end of things was a nice dichotomy. We were able to walk through and take pictures in just about every part of the process. Here’s probably my favorite from it of their four stills. We also were able to watch one of their warehousemen moving a bunch of barrels that they had just finished filling in for aging and were able to spend a little time in one of their warehouses.

The barrel that stood out the most is this guy Bunnahabhain (their sister distillery) from 1974 that they were trying to get to 50 years. Our guide let us knock on the side of it to get a real feel for how much was lost to the angel’s share over the years compared to a much younger cask (there was one below it, I think about 19 years of age). Basically, this cask only contains liquid up to around where the middle of that “5” near the bottom where it’s marked 59 / 2. Hopefully it makes it to 50!

They had a distillery cask available but it looked like they were just catching the last few drops of that barrel so I went with a few miniatures instead.

Fun Fact Did you know Deanston is powered fully by renewable energy? They have water turbines on site that power the distillery using water from the River Teith and sell the rest to the national grid.

Cask Type: Aged 17 years in Bourbon casks, finished for 2 in Muscat ones.

Fun Fact 2 While I’d heard that Sherry casks were more expensive, our guide noted how much more expensive they were. She mentioned that an ex-Bourbon cask could be had for about £100, an ex-wine cask for about £400, but an ex-Sherry cask would go for £1000 or more. While I’m sure some of the other distilleries may get better rates, it does give me a little more an appreciation for those delightful sherried drams.

Nose (according to the wife): Very sweet. The muscat is really noticeable and just about all you smell. There is a hint of pear that goes in with it though.

Palate: Slightly oily mouthfeel. It tastes absolutely of muscat grapes and wine. There are a few notes of lemons as well. It’s slightly on harsh side as far as alcohol burn goes so a bit of water does go a long way. Once a bit of water is introduced, you get more of the muscat grapes along with a bit of malt and bit of heather.

Finish: Medium in length. The main note here is of extremely buttery shortbread, almost feels like you’re inhaling it. Just when you think that the shortbread will linger, it gets dried out quickly with a bit of a very dry white wine kind of finish. With some of the water, some heather appears here as well and adds to the drying effect.

Conclusion: This is a really fun dram. It smells and tastes almost entirely of white wine and grapes but then toward the end, you get a few notes in the malt, shortbread, and heather that remind you that it is in fact a whisky. I really enjoyed this one, perhaps a little less time in the muscat casks might have helped with those notes absolutely overpowering just about everything else in the palate and nose but it is delicious. Would I buy a bottle? If I could find it on this side of the pond, absolutely!

Deanston 12: Decently made but really straightforward. Lots of caramel from the bourbon casks. Not a lot of complexity.

Deanston 14 Virgin Oak: Bit on the hot side. It tastes a lot more like a cognac than a whisky (coincidentally, we had a French girl on the tour with us and she absolutely loved this one).