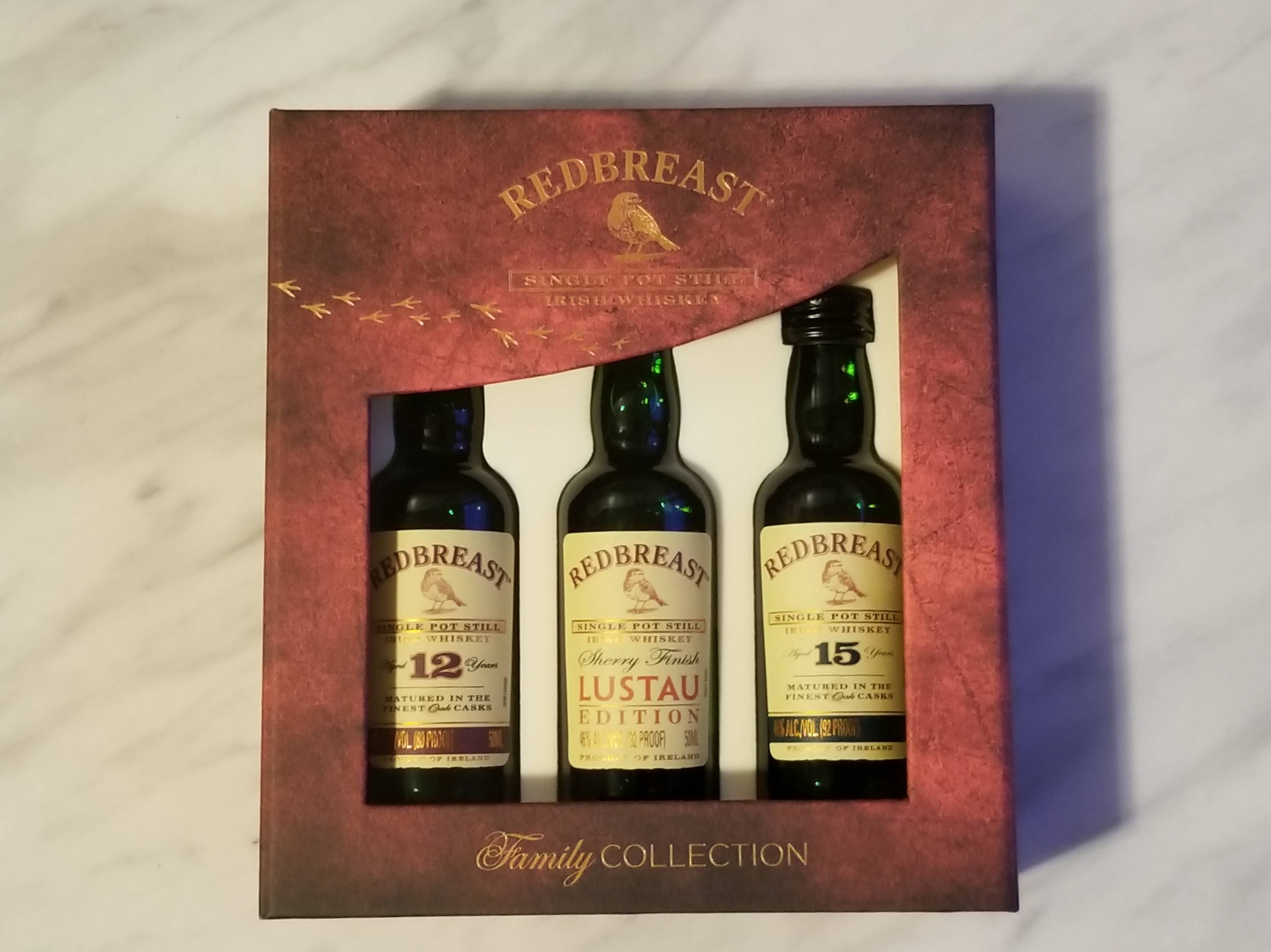 My only prior exposure to Irish whiskey is in the form of Jameson. I figure that it isn’t the greatest representation of what Ireland can produce (or at least I hope not!) much like how Johnnie Walker or Jack Daniels isn’t the best representation of scotch or bourbon, respectively. Irish whiskey isn’t particularly hard to find in the market I live in, I can always find a bottle of Green Spot or Redbreast, but I’ve always been a bit apprehensive about buying a bottle. I was pleased to find this little sample set so I could try them out.

Nose (according to the wife): Sweet and floral. There’s a bit of honey and it warms the nose in a lovely manner.

Palate: A bit creamy, but not overly so. There is a distinct metallic note (copper maybe?) and a bit of sweetness from the malt. Otherwise, it’s pretty bland without a whole lot going on.

Finish: Medium-to-long, which was a bit of a surprise. The aftertaste this whiskey leaves behind reminds me a lot of the aftertaste after munching on a few raw walnuts—slightly bitter with a bit of nuttiness.

Conclusion: A completely inoffensive whiskey to the point where there really isn’t a whole lot of flavor. The nose isn’t half bad and the finish was surprisingly decent but otherwise very boring. Not one I’d pour down the drain but not one I’d spend any money on.

Age: NAS, according to their website, it is between 10-13 years old where the first 9-12 years are in traditional bourbon/sherry casks and then finished in sherry butts for 1 year.

Color: 1.3 Russet / Muscat, definitely has had coloring added. The sherry influence is a bit noticeable as it is darker than the 12 and the 15.

Nose (according to the wife): Sweet with the sherry influence coming through with a bit of solventy burn. Otherwise, it’s fairly neutral.

Palate: While it isn’t the strongest, you can definitely taste the sherry influence in this. Enough of the sherry is there to taste but nowhere near a sherry bomb. It’s slightly sweet which goes well with a bit of the malt that’s there. There’s a bit of pepper and oak spices which are well tempered so that it doesn’t feel excessively hot. It’s pretty smooth to begin with and with a bit of water it gets almost creamy. Something nutty also comes out when some water is added, I was thinking of marzipan.

Conclusion: Talk about a huge step up from the baseline 12 year old. While the nose isn’t quite as nice on this one, the palate makes it a delightful sipper, and the finish is decent. It’s not overly sweet but there are a few lovely notes in there. I would love to see this one after it’s been aged a while longer as I think it could develop a wonderful complex palate. Would I buy a bottle? For the right price, I would.

Nose (according to the wife): The main note is a sour/tangy one, perhaps a bit of raspberry? There’s some medicinal notes in here as well making it quite a departure from the previous two.

Palate: Talk about a creamy whiskey—it’s so creamy that I was reminded mostly of heavy cream. There some honey and vanilla in here along with a fresh but slightly under-ripe honeydew melon.

Finish: Interestingly shorter than the others coming in at a medium length. This finishes very hot with way too much in the way of oak spices. It seems like a very young whisky for some reason.

Conclusion: This is a really weird whiskey. The nose teases that you’ll get something tangy then you end up with what might be the creamiest alcohol I’ve had that isn’t Bailey’s. It’s not bad, just…different. I doubt I would buy a bottle of this.

Final Thoughts: Overall, a very interesting experience but not one I’d want to repeat anytime soon. The 12 year old was bland and the 15 year old was just out there with the creaminess. The Lustau Edition was a nice solid dram but not one I’d spend a whole lot of money on.